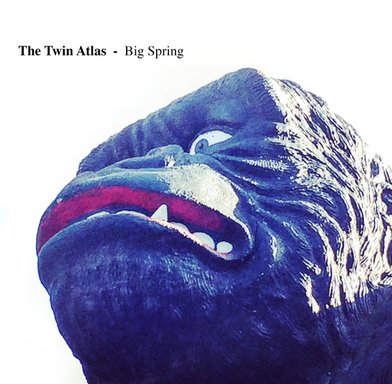 Like secretly smoking run-aways from the boys’ choir, Twin Atlas is sitting on a porch at night, humming their dreamy and jangly folk-rock songs. It’s a work-in-progress, a meditative soundtrack for shooting stars. The rather brief album Big Spring is autumnal and bitter-sweet in some ways; or as if the songs had sprung from the last trembling days of summer. The music gives me a feeling of being a hopeless has-been (or even a “never-been”), but at the same time the music is an expression of trying to transcend and process that very feeling. It is a transport medium and a vehicle further so to speak. Another ambiguous aspect of these songs is that while the chords, moods and themes are somewhat melancholic or perhaps insular nostalgic there is a brisk lightness to the production and the sounds themselves; the jangly guitars and the vocal harmonies has a springy sweetness to them, contrasting the gloomy shadows.
Big Spring was released through New Jerseys Tappersize Records in 2016. Only 50 Cd-r copies were made but the album is available to the world digitally through different music platforms such as Bandcamp and Spotify. Big Spring was released as a one-off album, “a brief break in the hiatus”. The Twin Atlas life span can be read on their website; The Twin Atlas: 2000 - 2010 (*2016 slight return). Big Spring is the ghost of the dead returning to life for one last show.
Some tracks are building up like the faster guitar tracks by The Cure (but without the charismatic and nervous vocal-presence of Robert Smith, that is), other songs are like short shimmering meditations, atmospheric diary notes sung with Byrds-esque vocal harmonies. Taking the plunge, there’s nothing catchy here but rather something lingering contemplative like in the almost droning song "Other lives" and in the long meditative final track "Over easier". These two tunes are reminiscent of the dark dreaming of Yo La Tengo’s drone-ambient-pop on the deep blue disc "And Then Nothing Turned Itself Inside-Out" but minus much of the electronic quirks and the trippy excesses. At times there is something wonderfully sketchy about these soundscapes painted with vocal harmonies, folk-rock guitars and neat drums, as if the music's charm also lay in what it could have become, bubbling with potentialities and possibilities.
I sit on that porch with Twin Atlas and listen as they sing about the past and the future at the same time, in an incantatory folk-song for the here and the now. “Life is scintillatingly, and heartbreakingly, short” the music seems to tell me and “it’s a long way back to each other” (like they sing on the transient one-minute song “Long way”) and the fleeting moments just strips away but in this vessel of music, in the brief Big Spring, we can find meaning and let go, if only for a while.