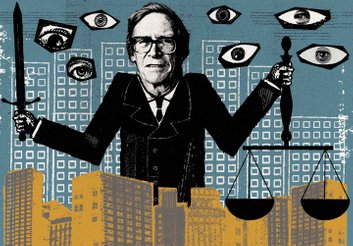 Illustration by Ben Jones , (taken from an article in The Nation october 29, 2019)

The philosopher John Rawls wrote that when people contemplate and determine society's rules and structures, they do so based on self-interest and ground their decisions on their own circumstances, personal characteristics and preferences. These patterns of decisions are also, according to Rawls, based on ethnicity, gender and social status and of a definition of what is Good.
At a guess we both celebrate freedom of speech, freedom of the press, freedom of religion, freedom of opinion, yes lots of liberties. But do we both pay homage to the randomness in how, for example, intelligence and creativity are being distributed among the population? Do we both celebrate the randomness of being born into a certain socio-economic segment or into a home without abuse- and drug problems? As a somewhat individualistic person I am a champion of responsibility and "each his own" and all that but there is something absurdly chance-like in the very handing out of these biological and socioeconomic cards that makes me think of some kind of blocked "survivors guilt” in the psyche; a survivor's guilt directed towards those who did not succeed as well as others in the “big lottery”. Maybe this is the blind spot you and I share? Some are born with cognitive and emotional abilities that can make them thrive in our capitalist system. Others not. And isn't it fair that a little of my salary goes to those who haven't had as much luck in the lottery as I have? Because I do not bear the responsibility for all my abilities myself, I have little to do with their ’coming about’ and their origins and therefore I cannot claim all wages and take all the credit for my work. It is in initiation, planning and enactment that we have the responsibility (if free will exists)… but is it there in the basic material, in the starting point? I can see the rabbit hole here that is the debate of nature versus nurture but that is another wall of text.
Speaking of chance and gambling and so on. Rawls meant that a just society is a society where if you knew everything about it you would want to enter it at a random place; so for example in a "societal lottery" according to Rawls I would have known that no matter what seven numbers I play I will not, at the very least, be residing in the gutter when all lotto numbers have been drawn. (I probably exaggerate the significance of chance to make a point, but it cannot be denied either).
Rawls argues that libertarians cannot grasp the social relationship between the individual and the political system (and the state) because they tend to view all social relations as a network of private agreements. Rawls thinks that the reasonable relationship between person and state is not like that between consumer and company, but like that between the board member and the company. That way they are part of the same body (but do they then, on the other hand, share the same blind spot?).