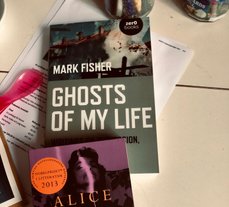 (Snap, crackle, hiss… much like the sound of" Rice krispies" ... snap, crackle and pop!)

In the book "Ghosts of my life" Mark Fisher writes something about vinyl crackle : it is evoking the past and at the same time marking out our distance from it.

The crackle also makes us more aware that we are listening to a recording, it's as if there's a suspicion raised, something unpredictable is wavering and hovering over the music, and if the music was a creature of some kind it would become more self-conscious as a result.
Whether it's the hiss of a cassette recording, the crackling of an LP or the swaying of a degraded VHS tape, the noise we hear is like a sensation from another time, it's the sound of absence itself.

(my memory is distorted, it's as if vinyl crackle is raining all over it)

One reconnaissance is that the vinyl crackle began to be deliberately

reintroduced into music again around the same time as the CDs made vinyl records obsolete, but it was also appearing earlier in the 1980's when musicians began to sample the "wax". Around the year 2000 or thereabouts vinyl records got a low-scale rebirth, so the crackle also came back again from its original direction.

Vinyl crackle is a bit like a classic quote from Hamlet; "the Time is out of joint" and the music with the LP crackle is saying "this does not represent now… or if it does it is also then, it is a kind of 'now-then'", it is a dissolution of linear perception of time and one which lands in a circular ditto.
Music and Water have an interesting relationship. The poet Joseph Brodsky writes that music is the twin of water. Music and water are a set of twins that reflect time, moods, environments, figures and fragments, but in different ways. Vinyl crackle is like having water, the twin of music, constantly ripping in the background and reflecting time, but in a trailing ghost version, like someone who exhorts and does not let go, like the ghost in Hamlet.

The 'authentic crackle' - the not aesthetically imposed one - was an expression of the decay of the medium and the degradation and loss of storage function.
Consciously imposed crackle may also express a kind of loss, though another type of loss. A more ethereal?
Etymology for etheric = (in higher style) to I b: transform into ether; (gm removal of all material) to spiritualize, refine, make ethereal. V. RYDBERG Ath. 312 (1859). "The bell sound changes, etherizes and gets a mysterious echo in my chest."

Through this fluttering noise, some people want to convey the illusion that one is listening to the audio material in a public area; at a café, a train station, a business center or in a humming laboratory. The mediator wants to convey that you are 'listening to a listening'. Or perhaps the message is that this is not the 'real' version we are listening to, this version is just a rumor. The listener can add for himself, with his imagination, what is missing.

The lost object can never be retrieved, all we have is this crackling sorrow - from the radio of nonappearance - reminding us that we are worlds apart , but I can still hear sighs, pops and hissing sounds marking out - and embodying - your absence.
Hauntology according to Fisher: we are haunted by a lost past and also by a lost future, a particular possibility of the future that has vanished (because of the lost object).

I want to create a warmer organic feeling on my track so I download some crackle from the free sound project , I might use the noise  "to cover the lameness of [my] tunes."

In the cafe with the humming roaring air conditioning. The analog purist maintains that digital recordings (and playbacks!) can sound sterile and lifeless but he does not buy my solution with a subtle addition of vinyl crackle or cassette noise.

Mark Fisher wrote that vinyl crackle can convey a vibe from the time of analog fragility - in terms of storage media - as a contrast to today's stable - lossless - and reduplication-safe digital counterparts. There's that thing about accessibility again, which can easily degenerate into snobbery.
In the sea of metaphors: Life is fragile, and thus analog ? ( perhaps we want a medium that reflects that fragility )
Temperamental-linguistic metaphors: the exclamation mark is digital. the question mark is analog.

Maybe you like (and idealize) vinyl crackle in the same way as one often can do with things lost in the ocean of time, although the crackle was the sound of absence itself, a kind of historical prism through which you perceive the music, a dreamy halftone auditive bitmap where shimmer from another world seems to pop up, flicker past and rain down (snap, crackle, hiss).

Okay, now I'm cycling out into the dopey parts of my imagination (with some inspiration from Mark Fisher): the vinyl crackle is like the ghost in Hamlet, it's modernism that haunts postmodernism, it is ghostly flicker from a tendency that has disappeared; from what was once popular modernism and which generated adequate forms for the time period…
(Well, what would Freud say, sometimes crackle is just crackle?)

The poet W.B Yeats writes: “Man is in love and loves what vanishes,
What more is there to say? ”