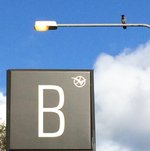 The aphorism is suitable for anyone who is more interested in the formula - the finished crystallized tablet of knowledge - rather than the dialectical and/or intuitive, speculative process leading up to the formula itself, it is handy for those with a penchant for crude thinking and terseness. Wikipedia states that the aphorism is a "concise, terse, laconic, or memorable expression of a general truth or principle" and following this definition we can question whether B.A Cottonmouth Fermer really is in the business of aphorisms at all in his latest writing exercise "How to vanish without a fuss, volume 1". Sure, these fragments of thought filling up "How to vanish without a fuss, volume 1" are somewhat terse and sometimes memorable but as for displaying general truths and principles I am not so convinced. The small bits of texts featured here reads more like a series of metaphors, question marks, flashing images and bursts of anxieties.
B.A Cottonmouth Fermer - for convenience referred to as BACF for the remainder of this review - comes straight out of the gate as something of a radical agnostic; "at the very end of life... is there a tunnel or a dead end? Only an impostor can be certain", and in the process he is also implying that we all are either impostors or relativists, or perhaps a bit of both. There's more of these agnostic question marks resurfacing when BACF is passing by different religious outlets (and a health club) and at every establishment he will ponder if this is the one who got it right metaphysically speaking and we follow the thoughts of a man with too many doors and options available, for him almost any religious alternative seems plausible but by some coincidence, or inherent hamletism, he always finds himself on the outside looking in.
BACF goes on shooting from the hip when he seems to categorically be misrepresenting Heidegger and the quest for authenticity and BAFC looks like someone who just googled "Heidegger + authenticity" during the lunch break and then tweeted prejudice without inhibitions (Hamletism was bypassed here). And again, the formulation is memorable but it is no aphorism because it does not convey a general truth or principle it looks more like a fractured unedited opinion from someone who hasn't read a lot of Heidegger. These bashings of philosophers, I count to two of these, are rather discordant and scornful and it comes off the page like it was written by some college brat who is disdainful of his philosophy professor who gave him a bad grade.
And this bratty categorical mindset is what is preventing these fragments from probing any deeper, it's as if BAFC suffers from the "Show don't tell"-redundancy and in his eagerness to look deep and moving he instantly becomes shallow and stale. The sweet spots, or rather bittersweet spots, in these fragments are where BAFC puts himself on the line, when he is actually risking something, when he dares to be vulnerable and refrains from posturing the clichéd pessimist jargon. Hopefully we will be seeing more of that in the next collection.