Notes on the telephone booth

What is forgotten is never really forgotten, it is just waiting for an address, like a taxi at the central station.

Where are all those boxy little cabins that were scattered here and there in the cityscape, or next to a gas station out in the sticks?
We went into these cubes of glass and metal and could communicate privately, so that no one would hear. Today we sit on the bus and talk freely so that everyone (including the FRA) can hear our private communication. No fuss at all.

I remember there was an orange-colored telephone booth at Vasaplatsen in Gothenburg (or have I dreamed it? It all seems a bit absurd now).
It was a perfect quadrant of establishments at the intersection of Vasaplatsen; Seven Eleven, Café Java, the Vasa grill and then the phone booth near the tram stop. When I lost my cellphone while drinking on Saturday, I went down on Sunday and called home to dad and to other numbers that I had memorized. "You should have kept that stationary telephone!" Yes of course.

The cell phones came and put the phone booths out of business, or more kindly; they came and whispered to the old-fashioned kiosks, "we'll take it from here."

In the developed modern society it can nowadays be interpreted as unusual if someone leaves their home without a mobile phone. We thus carry a constant opportunity to make telephone calls, to communicate and to surf the internet for information and sound and images ... "no voids or empty spaces allowed here".
During the time of the telephone booth there was a gap, a temporal and spatial area between the home's stationary phone and the telephone booth, that space may now be gone unless you lose coverage, battery power or composure. (I imagine that I have an existential abstinence for that lost gap ,or whatever we should call it)
What did we do in the "lost gap"? did we allow ourselves to think to a greater extent, to shift perspectives, to daydream, to fantasize, to improvise and to wander a while in consciousness, and in space? Perhaps there was ample room to think for a second time before sending that angry letter (but we carried on being angry anyway).
Maybe the "lost gap" also was a space where we could disagree, and that was okay.

Through the "lens" of past phenomena and depleted technology one can see something and possibly illuminate what is missing or not addressed in the present. It's like in a line from a Joni Mitchell song "something is lost, something is gained… in living every day".
What one encounters are not necessarily better or worse comparisons, the comparisons are horizontal rather than vertical; what happens if I put this phenomenon next to this (in juxtaposition) etc etc? What new constellation will we find when arranging these discarded objects?

The telephone booth, this casing of metal and glass, raises a question to us in the present, "How should we continue to be private in public?" ,
is it even relevant? . Perhaps being private is really outdated as well.

It was often filthy and squalid inside the kiosk. Some telephone booths were broken with a cut-off telephone cord others were smellly and scribbled with obscenities and hateful comments. I only went in there if it was extra necessary.

To stand in there and talk; one was exposed and private at the same time. Everyone out on the street and in the nearby houses could see that someone isolated was standing inside the telephone booth and was trying to communicate. Only lip readers could understand what the conversation was about. It was like seeing a dance without hearing the music.

In the Movies. People step inside phone booths and are suddenly transformed! Clark Kent becomes Superman. They are portals to other dimensions and eras or act as exits (or whatever it was) like in the movie "The Matrix". There is also something spy-like about the telephone booths. Missed information and obscure intelligence are conveyed over a crackling telephone line and into the ear of a man in a hat and overcoat inside the  booth. And when x gets out of the kiosk, a cigarette lights up. The cigarette and the telephone booth! typical 20th century phenomena, and they both signaled space and seclusion, "he lights a contemplative cigarette".

It was a protection from the pouring rain and the portal for prank calls and sexual invitations. In the graffiti above the beer-soaked and sticky keypad it read; "Call Sibban at xxxxxxx, always supportive."

The telephone booths took up spaces in the city. What stands where they stood? I read that in Vancouver they had built small shelters of them and somewhere in Japan they became art installations. On Vasaplatsen in Gothenburg there is now a public bathroom where the old phone booth used to be.

On an overcrowded bus. The person in the seat behind me speaks loudly into his mobile phone, and dramatically as if he were in front of an audience, there is something in the tone that is exaggerated and loud and that makes it sound as if the person wants to communicate with more than with the person being called, he wants all passengers to hear, it's like a performance. Such exhibitionism would have been unthinkable inside a telephone booth, unless one is quite paranoid and believing one is monitored and supervised.

The telephone booth is still there in my mind, like a strange haunted object on memory lane.
It's a modernistic symbol for privacy and seclusion, but one with a shabby interior.
During the days of the phone booth we had a physical cover that protected us when we telephoned in public. Today we instead have to have that cover mentally around us, so to speak. But what does that mental cover consist of?

The mobile phone and the internet made everything more accessible!, but has something simultaneously been lost as a result of this incredible increase in availability? A simple answer may be that we in the process have lost patience. It may also be the case that we now have a kind of inner demand to be accessible, up-to-date, connected and compliant, which in itself creates a constantly grinding anxiety. The Internet and the mobile phone have become like a second consciousness, demanding its creed.
If the era of the phone booth was a time of boredom then the age of mobile telephony and the internet is perhaps more fun but at the same time more anxious and nervous, maybe that's the price of everything being accessible and so up front.
In the age of the phone booth there was a significant "gap" in communcative availability. The absence of gaps, spaces - 'temporal, spatial and emotional - voids even, makes me think that everything is suffocatingly close right now. Do we in the Internet-age suffer from a kind of cognitive myopia? A lack of critical distance ?

I write this on a place in cyberspace, publicly visible if you have the address. This "scribble" on blogs and websites is like a cousin to what was found on the walls inside the public telephone booth (only blogging is mostly not considered vandalism). With the internet and mobile phones, the individual has been given more space to express him- or herself and to communicate and disseminate information. It is undoubtedly a democratic development. At the same time it is a fragmented world that you encounter on the internet, a jumble of texts and voices and images and sounds .... the fragmented pattern itself is not completely different from what you found inside the telephone booth, in a sense the grafitti and scribble inside the phone box was like a premonition, a preindication of what would come next, it was the pre-internet era equivalent of youtube-video commenting and spontaneous tweeting.

I imagine a new cellphone or an internet router that comes with a sticker that says "Mind the gap!". Or perhaps it should say "Enjoy the gap!"
(and maybe that is what the telephone booth is telling us, today).

("Mind the gap" is an audible or visual warning phrase issued to rail passengers to take caution while crossing the horizontal, and in some cases vertical, spatial gap between the train door and the station platform.

The phrase was first introduced in 1968 on the London Underground in the United Kingdom. It is today popularly associated with the UK among tourists because of the particularly British word choice (this meaning of the verb mind has largely fallen into disuse in the US).) 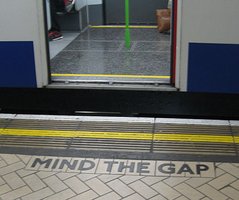