Walking through a city of words:

In Walter Benjamin's book about the 19th century poet Charles Baudelaire - Charles Baudelaire: A Lyric Poet in the Era of High Capitalism - two stereotypes emerge, two different ways of approaching the modern city, two types of city walkers: the flaneur and the ragpicker. The pair can also be viewed as metaphors for different types of reading and/or of readers.
In an original definition, the ragpicker was a figure, sometimes employed by the paper mills, who would roam around the city and collect and salvage textile rags and other used materials. They moved over very large areas. The word ragpicker has probably also come to casually include those unfortunate homeless persons who generally wander around looking for useful things among the nooks and crannies, basement corners and garbage and rubbish heaps. Nowadays one could assume that the word is more rarely used.
The flaneur is inclined towards strolling, to wander the streets (mostly) without a goal, he strolls through the city and looks at it with the gaze of desire and is guided by whims and impulses…or flashes of inspiration. The contemporary ragpicker who walks through the city must have a higher sense and awareness of usefulness, shortcuts, tricks, secret passages, generous business owners, hiding places and when the best time for 'dumpster diving' is at that container at this and that address. The ragpicker’s creativity is tinged and permeated by necessity, it's more work than play of course, while the flaneur is more in search of the 'experience’ par excellence: both seek, however, in the hustle and bustle of the city, if we are to be stereotypical, a potentially transforming experience (“a totalizing accretion of transmittable wisdom, of epic truth” which Walter Benjamin described as erfahrung which contrasted with the more incomplete, isolated and fragmented experience dubbed erlebnis).      The flaneur and the ragpicker occupy almost diametrically different positions on the socioeconomic ladder - the former has renunciations and the latter has tribulations - and they bring up the issue that whiz past in The Strangler's song "Always the Sun":

"Who gets to work and who gets to play?". The ideal can be, in addition to greater equality, a kind of merging of the two alternatives: "workplay" or "playwork", ie work that is perceived as play. "Workplay" also serves as a description of the inspired reading: the reader flies lightly over the words despite the fact that there is a dimension of complicated cognitive work beneath it all: decoding, word recognition, syntax comprehension, interpreting inference, retrieving and leaving in working memory, assigning meaning and so on.
The books are like cities, villages and landscapes of words and I as a reader wander through these labyrinths of sentences and I take on, as it were, different and varied reading roles, sometimes I probably (unknowingly) assume several roles at the same time.  I can, metaphorically speaking, be as a sort of reader-flaneur (a chameleon that flows and blend into the surroundings, the text), or a tourist (in some way distanced, watching and recording but not being authentically involved, I make no deep reading…), or I am like a kind of prostitute (I read for money, sell my attention, as part of a job I find no joy in) or I can be a thrill-seeking window-watcher reader who wants to sneak peek and listen to gossip.  In some cases, I am like a ragpicker strolling through the city of words, I wander around and search out of necessity, I am trying to cope with life and I hope to find, for me, vital fragments – the precious rags of reading! -  , material that can help me (in deep depression, I clung like a shipwrecked person to a few lines from the poet Tranströmer..).
Unlike the flaneur, who usually strides forward for the sake of his pleasure or his whims, the ragpicker walks around the streets grubbing, rooting and twisting and turning things, all out of necessity. The ragpicker is also the more ecologically oriented of the two because he is a recycler and a reuser of high rank.

But this specific role-playing, when it comes to reading, cannot be evoked by a pure act of will, many factors come into play: temperament, interest, degree of difficulty, stress levels, cognitive capacity and so on, and one can imagine that during a book reading you switch between these different reading-roles.
If the ragpickers are to some extent synonymous with the homeless of our times, they live a precarious existence on the margins. Ragpicker-like readers, on the other hand, do not have to have the same strained economic and social situation, but they can certainly be rejected and ostracized because they tend to be the most original, critical and radical interpreters of a text: they examine the ideas that travel inwardly from the margins, they inspect the paradoxes that blossom in the branches of the causal chains, and in the same way that the ragpickers twist and turn things, these types of readers pick out the fragments and reuse, reformulate, speculate, question and examine them (this is analogous, or at least corresponds, with Walter Benjamin's and Hannah Arendt’s ideas that says that when we look at History we should be like pearl divers who dive into the sea of the past, the past which consists of decay but also of crystallization which contributes to new forms and constellations in the present, and these pearls come back to us as fragments of thought).
I open a new book and set off into the city of words. Here, amidst this throng of words - streets, alleys and boulevards of letters - there must be a decisive insight that can change my destiny, a hidden track perhaps or a crackling epiphany that will transform the playing field, or something that simply makes the grief more bearable, if only for a while.
Reading can be more democratic than real life and we need reading in order to gain perspective on the near and to be able to imagine the distant (like the Other, for example, the fellow human being who seems so different from me). Reading should be like the city park: a leafy place open to all and which does not require an entrance ticket. However, work is undoubtedly required to acquire reading ability, and the goal is the orthographic1 reading, and the automated decoding, so that the cognitive force can focus on the understanding of clusters of sentences rather than on individual graphemes, but, for various reasons, not everyone can get there. Consequently, it becomes an important part of the educators’ work to try to make the learning process playful and inspiring for the students and to try to arouse curiosity before the linguistic toolbox and not least provide alternative complementary methods for those who have difficulty cracking the code of reading so that they can achieve something similar to the "orthographic freedom of movement", an ability our virtuoso ragpicker-reader takes for granted.

1  In orthographic-morphemic reading, it is generally the morpheme that is being observed. A morpheme is the smallest unit of language that carries meaning. For example, dog is a morpheme. This is the most advanced phase, as decoding is fully automated. Reading is fast and you do not have to consciously analyze individual graphemes. With a single glance, a word can be identified while paying attention to each grapheme in the word. Orthographic-morphemic reading is gradually built up through the alphabetic-phonemic reading, as the reader after many encounters of words can form the orthographic representations. 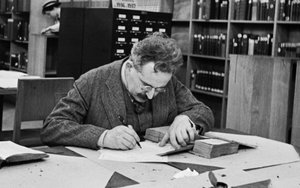 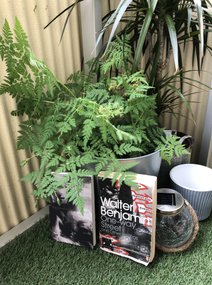 Some Walter Benjamin books on a balcony.